兼容性: Requires iOS 5.0 or later. Compatible with iPhone, iPad, and iPod touch. This app is optimized for iPhone 5.

If you like Aworded, you’ll love Word Crack, a fast and fun word game to challenge your friends. Who will find the most words in two minutes?

Word Crack is asynchronous and cross-platform. Play against your Facebook friends or against random users of any platform. Besides, there are unlimited simultaneous games!

Form as many words as you can by dragging your fingers across the letters on the board upwards, downwards, backwards, diagonally, etc. Every game has three rounds, and every round, two turns of two minutes each, so you have to be really fast! The winner will be the player who gets a higher score.

You can use the special tile spaces on the board to get more points. And remember to use the Power-Ups to find more words and win more easily! 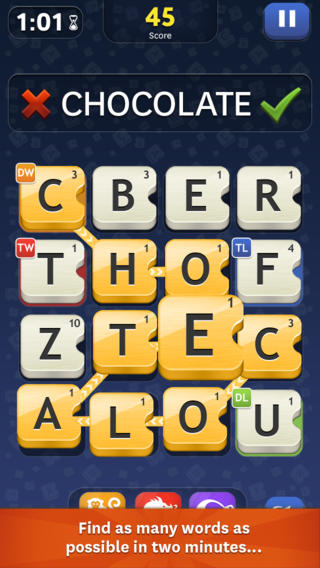