There are many other features:

☆ Support Retina screen!
☆ Share the unsolved deal through Facebook and Weibo!
☆ Ready-to-use hints!
☆ Intelligent move function does you think!
☆ Horizontal or portrait mode as you wish!
☆ 1,000,000 deals for you to choose

♣Building during play♣
The top card of each cascade begins a tableau.
Tableaux must be built down by alternating colors.
Foundations are built up by suit.

♢Moves♢
Any cell card or top card of any cascade may be moved to build on a tableau, or moved to an empty cell, an empty cascade, or its foundation.
Complete or partial tableaus may be moved to build on existing tableaus, or moved to empty cascades, by recursively placing and removing cards through intermediate locations. While computer implementations often show this motion, players using physical decks typically move the tableau at once.

♠Victory♠
The game is won after all cards are moved to their foundation piles.
For games with the standard layout (four open cells and eight cascades) most games are easily solved.

-Click the ‘Medal’ to check how many deals you have finished!
-More beautiful table
-Delicate UI
-Bugs Fixed
-Also available in Android: http://t.cn/zj7GAmg 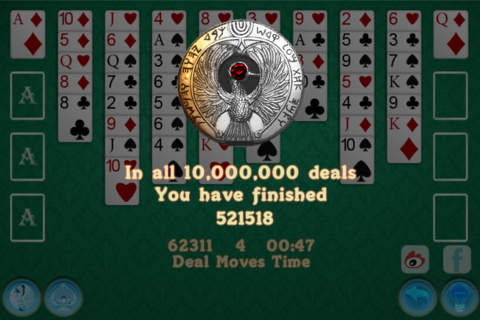