* It is a simple GO game(9 x 9). It is easy to play. It provides Game Center Network Battle.

* To avoid the argument, App check the dead stones that not be captured after game over.

* The icon below the word “NOW” shows whose turn and the piece used.

* To provide the diversified playing methods and different settings below:
-Computer- Your opponent is the computer. This is a practice for you. The computer makes the first move.

-2 Players- Your opponent is another person. The black player makes the first move.

-Network- Game Center matches the two players and computer decides the colors. You can play with all players of the world. (Please join Game Center at first.)

-Leaderboards- Game Center saves the result of the games including the wins, draws and defeats of the players, and provides the Leaderboards.

* The player who exits game before game over loses the game at the network mode.

* The more explanations please refer to the Readme of the app or APP Support.

-Add the Leaderboard of the win count for the playing with Computer. 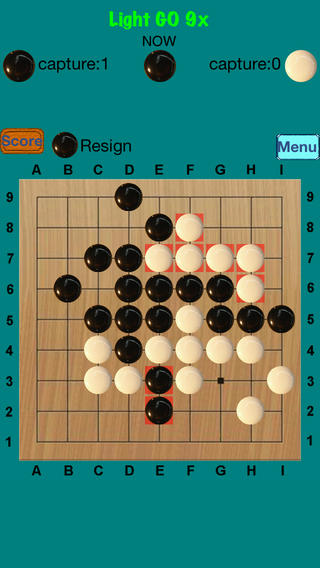